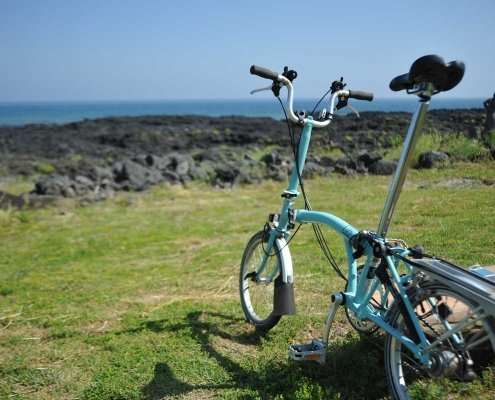 Electric folding bikes are turning up on streets, on trains and busses, and in office buildings and apartment hallways for a good reason.

It’s hard to beat the comfort of having a bike that not only folds down to fit in your suitcase but can also power you through a 20-mile ride without causing you to break a sweat.

Here’s what to look for when you want a compact bike for different travel days, storing in an apartment or for a long commute.

Simple Hub Motors – All the folding e-bikes in this roundup use a hub motor. Hub motors have a few advantages compared to the increasingly-popular mid-drive motors appearing on other types of e-bikes. One of the biggest reasons they’re often used on folding e-bikes is hub motors are small and don’t take up any additional space on the bike.

Most of the bikes on this list are powered by a 250-watt motor, but watts alone don’t tell a motor’s story. Torque is also very important. A motor with higher torque will feel more powerful and accelerate more quickly than a motor with less torque. But the more powerful a motor is, the more energy it uses.

For the battery, the stat you want to pay attention to is watt-hours (Wh). This one is easy: the bigger the number, more juice the battery holds, the further you can go between charges.

Another major consideration when shopping for an electric folding bike is the wheel size, because that might make the difference in how small the bike can fold down or in what kind of terrain it’s built to conquer.

Most folding bikes use a 20-inch wheel, which means they can be packed down to a fairly compact size that will fit in your trunk or on a train. Another consideration is what kind of terrain you’re riding and how that affects tire size.

If you’re doing a lot of off-roading, a folding fat tire bike is the way to go because those four-inch-wide tires will soak up a lot of rough trail. 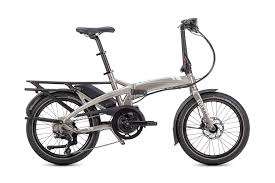 Best for: Turning your errand time into a fun time with your kid.
Tern has always been solely devoted to small bikes, so it’s appropriate that they create one of the best e-bikes. Powered by a Bosch Active Line Plus motor, the Tern Vektron S10 can go up to 20mph and has a battery range of 31 to 62 miles, depending on which of the four assisted modes you’re in. The bike has 10-speed Shimano Deore shifting that’s been integrated with the e-assist, as well as Magura MT4 hydraulic disc brakes for strong stopping power.

At 48.6 pounds and with 20-inch wheels, it’s not the smallest or lightest bike in this roundup, but it’s still compact enough to fit easily on buses, subways, and in taxi trunks when folded, so you can take it anywhere.

Best for: Travelers who want to see the world on two wheels.

This folding bike got a motor this year, adding more capacity for distance and cargo to an already ultra-practical bike.

Bromptons has always been one of the only folding bikes that can fit in an airplane overhead compartment; the electric iteration of the 16-inch-wheeled bike still folds to the same small dimensions but adds a custom-developed 250W front-hub motor with a removable 300Wh battery pack that offers a riding range of 25 to 50 miles between charges.

Available in a two- or six-speed model, the bike shifts and accelerates smoothly with or without the e-assist. At 35 to 37 pounds (including the battery), this is still one of the lighter e-folding bikes. The e-assist tops out at 15.5mph.

Best for: Riders who want more of a full-size feel.

Built to feel more like a conventional sized bike, the Latch is a bit on the heavy side at 51 pounds, with big, two-inch-wide Schwalbe tires on its 20-inch wheels.

The overall ride is sturdy and powerful, though, thanks to a Gates belt drive and three-speed Shimano Nexus internally geared hub, and Avid BB7 mechanical disc brakes for easy stopping. Powered by a 250w front hub motor, the Latch gives you two battery options.

The standard battery is smaller and lighter, which makes the bike easier to carry, but if you need more range, a larger battery is available. The latter increases the overall weight and cost of the bike but also extends the bike’s range to over 20 miles.

Best for: Climbers who want more gears when pedaling without assist.

Any rider looking for a folding bike on the lighter end with more gears should check out the Formula E18 with 18-speed Tiagra shifting. A super-charged version of Dahon’s S18, this electric iteration gets its power from a 350w BionX rear hub motor and battery system, which gives you a choice between throttle, pedal assist, and four regenerative modes.

The BionX computer system on the handlebar is easy to read and operate. The bike tops out at 20mph and has a reported range of about 50 miles, depending on rider weight and mode setting. The full package is compact and weighs in at 39.5 pounds, not necessarily a carbon race frame, but better than many e-folders.

Best for: Travelers who can’t get over the vibe of a traditional folding bike.

Montague makes good use of the Copenhagen Wheel (essentially a 350w hub motor with integrated battery that can transform almost any (rim-brake) bike into an electric assist bike, controlled wirelessly through a phone app) to adapt its 7-speed aluminum Crosstown model into a folding, super-powered commuter.

Unlike the majority of folding bikes in this roundup, the E-Crosstown uses 700C wheels, standard-sized components, and a frame that resembles more of a traditional-sized bike, which means it’s not very compact.

Best for: Taking the gravel long-cut on your commute in.

This RadMini can go further and faster on terrain other e-bikes can’t get to on 20-inch by 4-inch tires but it also folds up small enough to fit in your trunk or office when not in use.

Powered by a 750W Bafang geared hub motor, in addition to your pedaling with a 7-speed Shimano Tourney drivetrain, the bike has about a 25 to 45-mile range and a max speed of 20mph. A front suspension fork with 60mm of travel smooths out dirt roads and other rough terrain, and Tektro mechanical disc brakes lend confident stopping power.

All in all, the bike weighs 64 pounds, so you wouldn’t want to ride it too far without one of the five levels of pedal assist.

Best for: Conquering a hilly city.
The name of this e-bike already tells you a lot: It folds, it’s electric, it has a 7-speed drivetrain, and it rolls on 20-inch wheels.

It’s also powered by a 250W motor integrated in the rear hub, with a battery pack hidden inside the alloy frame. This is comparatively low-priced for an assisted folding bike, and it’s relatively compact when all packed down.

The Frisco has both pedal assist and throttle modes, with a range of around 30 miles, depending on your weight and how much assistance you’re using. It tops out at 20mph and has a claimed weight of 43 pounds.

Best for: Getting the ultra-compact experience at a great price.

At 38 pounds, the Vika is among the smaller and lighter folding e-bikes out there. While being 16-inch-wheeled, the aluminum alloy bike is powered by a 250w front hub motor. Included with the motor and electric system are four levels of pedal assist and a throttle mode (up to 17mph), all of which can be controlled by an LCD display that shows your speed, range, trip meter, and odometer.

The battery has a range of up to 30 miles. As for the non-electric components of the bike, 7-speed Shimano Acera gearing gives you all you need to keep pedaling with the e-assist turned off, with Tektro V brakes for stopping.

It’s a pretty great bargain for a fast-folding e-bike that packs down smaller than most e-folding bikes. Plus, the entire bike also comes with a canvas carry bag so you can carry it around easily when not in use.

Best for: Loading your bike down and heading off-road.

The IGo is an electric folding bike on 20-inch by 4-inch fat tires, designed to be compact enough to cart around in the back of your car so your two-wheeled adventure can start where the pavement ends. This aluminum alloy model uses a low step-thru frame and is powered by a 500W (peak) Bafang geared hub motor with a top speed of 20mph and a claimed battery range of about 37 miles.

The bike has five levels of pedal assist and a throttle mode, plus a Shimano Altus 8-speed derailleur for non-electric pedaling. Tektro Aries mechanical disc brakes give you stopping power in any weather.

Best for: Commuters looking for a good value from a brand they trust.

Raleigh’s aluminum-frame Stow E-Way model is powered by a rear wheel motor kicking out 45Nm of torque, and a 250wh battery that gives you a range of up to 30 miles, depending on weight and mode. The bike has Shimano Altus 8-speed gearing and four e-assist levels, which top you out at 15mph.

The bike rolls on 20-inch wheels and packs down to about 35 inches by 17 inches, with a claimed weight of 44 pounds.

A kickstand, fenders with mudguards, integrated front and rear LED lights, and a rear pannier rack round out the package, adding up to a great value for the bike’s high-quality ride.

At the end of the study, both bike riding groups enjoyed significant improvements in executive function, which is the ability to plan, organize, and complete tasks.

Interestingly, though the researchers had anticipated the riders on the standard bikes would improve the most because they would be working harder and therefore getting more exercise, that wasn’t the case.

Not only did the e-bike riders score as well as the regular bike riders in the follow up cognitive tests, but also the motor-assisted pedalers performed a little better in processing speed and enjoyed a more improved sense of well-being than the other two groups.

“We had thought that those who used traditional, pedal-only powered bikes would have the greatest brain and mental health boost, as they would be giving their cardiovascular systems the biggest workout,” corresponding author Carien Van Reekum, Ph.D., professor of psychology at the University of Reading, said in a press release.

“Instead, people who used e-bikes said that they felt more confident in completing the requested activity of three 30-minute rides a week for eight weeks, compared to pedal bikers,” she said.

“The fact that the group was able to get outside on a bike, even without much physical exertion, is likely to make people feel mentally better.”

“The e-bike enabled them to explore their local area and interact with people and the natural environment secure in the knowledge that they could rely on powered assisted support to get then home safely and stress-free,” Jones said.

If any of this is not clear, or you have any questions you’d like us to answer – please let us know!