Next on the long list of reasons to be excited about our E-Bike Store Grand Opening next month, is the arrival of Envo’s D35. There’s so much incredible craftsmanship gone into creating this market leading E-Bike design one could easily write a short novel on it, but better than that we’ll hand you over to legendary Canadian bike engineer Paul Brodie to fill you in on all the details…

Paul Brodie is founder and former owner of Brodie Bikes, with over 35 years of expertise in designing and building bicycle frames. His sloping-top tube frame mountain bike frame is famous in Canada. Paul has dedicated his life to building unique hand-made bicycles and motorcycles.

Some of his creations, such as the award-winning Whippet 1888, are replicas of historical models.
Paul is now the mastermind behind Flashback Fabrications Ltd. who builds unique replicas of vintage racing motorbikes such as Excelsior, offered at 135,000USD. He has been inducted into the Mountain Bike Hall of Fame. ENVO D35 is a newer electric bike proudly engineered in BC Canada. Who can do a better product evaluation than a BC well-known senior bike engineer like Paul?

A journey of thousand miles begins with an ENVO Ride

I met Ali, the founder of EbikeBC at the BC Bike show a couple of years ago. We stayed in touch. Recently I was Googling some ebike stuff and I came upon his video where he was explaining the features of the ENVO D35. Then a few days later he emailed me and extended an invitation to visit his new location in Burnaby. Would that be a coincidence? Whatever it was, I accepted. I drove to the new showroom in Burnaby. We talked, and it soon became apparent he was hoping I would help him review the ENVO line. I had never even ridden one, so the offer was made for me to take a large ENVO Aquatic Galactic to my place and do some riding.

To be clear, I am not an ebike expert, but I have been around bicycles a long time and I do know what I like and what I don’t like… The first thing I noticed was how tall the bike was. I borrowed a Large. It wouldn’t fit upright into my Honda Odyssey van, which was a first. The handlebars measure 46” from the ground, so I had to lay the bike flat in the van to get it home. Ali says the part of target market is 50 to 70 year olds, and I know a lot of those folks do want high bars. Yes, I too am in that age category (65), but those bars are way too high for me. More on that later. My first ride. Looking at the bike, the styling is ok. It doesn’t “knock my socks off”, but it is ok. I do come from a racing background, and this bike is not a racer. But here we go. The steering is nimble, and the disc brakes are good. There are 5 power levels, and I usually chose number 3. With this setting, I could maintain 34K/hr on the flats. I can’t do that on my regular road bike. So, I did like that. I didn’t like the flat pedals, my Shimano shoes slipped around. The 46” high bars meant less weight was being transferred to the front wheel, and I was conscious of that.

I made some changes for my second ride. The handlebar stem is adjustable, so I lowered it to minus 40 degrees, took the spacer out from under the stem and placed it on top, and rotated the bars. This dropped the bars a full 3” so now we were down to 43”, much better. The flat pedals came off, and my Shimano SPDs went on. Lastly, my Brooks Cambium saddle got installed. Now the bike was starting to suit my riding style. Some people think an ebike caters to lazy cyclists. That’s not true for me at all. I still want my workout. I just go farther and faster. Yes, the hills are a bit easier, and I do like that. I also like going faster. It can be addictive, that’s for sure.

The bike’s frame is made from welded aluminum. I come from a steel background, but the ENVO rode fine. The top tube and down tube are hydro formed, which means water pressure is used inside the tube to help create the shape. There is likely an outer mold as well. On one ride I stopped at my LBS (local bike shop..) to get their thoughts on the ENVO. Immediately the mechanic grabbed one of their ebikes and brought out the competition. It wasn’t exactly the same as the ENVO, but the frame had similar hydro formed tubes! It’s common in Taiwan for a frame manufacturer to make basically the same frame for different brands. The ENVO is very quiet to ride. Over the wind noise, I can barely hear the gears in the rear hub motor. The rear freewheel is an 8 speed, the ratios are fine, and so was the shifting. I spent most of my time at power level 3. I felt that was a good balance between getting an assist and a workout. When you switch on the power (left handlebar) the power always resets to level 1, so you need to press the button to get the level you want. That could be a safety feature to avoid panic motor kick for first time use.

Not all e-bikes are created equal. Ali was explaining to me the feature called Soft Start. The controller feeds the power to the motor very smoothly, and there’s no “kick” as the motor starts spinning. I thought about that, and realized that my own bike, eBee, does that kick. When I start pedaling, I always feel the motor kick in, and it’s kinda cool, especially if I’m going in a straight line. Now, if I’m stopped, and want to get going and make a U-turn, that’s a problem. I’m an experienced rider with a good sense of balance, and I have to be very careful, because when the motor kicks in and the bars are turned, I really have to be ready for it. Riding the ENVO, there is never a kick. If you are a casual cyclist, you will like this. The Soft Start is a Nice Touch. Wheels are 27.5”, my favorite size. The 1.95” tire pattern is like a miniature knobby. This means it will work on pavement and on light duty trail riding. It will not excel at either, but they performed adequately and didn’t slip in the corners. At first I thought the ENVO had no water bottle mounts, but later I discovered they are under the downtube. The battery is mounted where the water bottle usually sits. So, having the water bottle so low is inconvenient for most cyclists to reach while riding. I ended up drinking water before my rides, but this is not optimum for longer trips. Yes, there are handlebar water bottle holders, but I could put a water bottle in my small backpack instead, but that means stopping each time to quench my thirst. On the left handlebar is a little thumb lever that is the throttle. This means the bike is pedal assist and/or throttle. Ali says the pedal assist will over-ride the throttle. I found the throttle was a wonderful little device to “get me going”. Some will say that’s cheating but I don’t care. A few seconds on the throttle and then I’m pedaling. That suited me very well. For example, crossing an intersection from a stop is a good place to use the throttle. To avoid panic or loss of control, both throttle and pedal assist run the bike with a soft start. The display on the handlebars is easy to use and see. The speedometer is on the left, and the power output of the electric motor is on the right. It shows how hard the motor is working. Most of the time I was riding (in level 3..) the power seemed to vary between 140 and slightly over 200 watts. Even though I felt I was maintaining steady torque to the pedals, the power meter was jumping around so I’m not sure how to account for that. Using the throttle only, the power meter soon climbs to about 600 watts, so you know much more juice is being used in that mode.

When I pedaled downhill, the power meter goes to zero at about 32 to 35 K/hr. This means I’m going too fast for the motor to be assisting me. Ali says the exact speed this occurs depends on the charge of the battery. A fully charged battery will cut out at a slightly higher speed. A full charge is 42 volts, and when you get down to 30 volts the controller will start to shut things down. Depending on the power setting you choose, the range is very decent. On a 15K ride on level 3, the voltage only dropped a couple of volts maximum which is about 20% of the complete range. The ENVO comes with lights, fenders, rear rack, and a bell. It is well equipped. The side stand is REALLY heavy duty and has a strong spring. It’s also mounted close to the rear wheel, which means you can push the bike backwards when the stand is down, and the left pedal won’t hit the stand, which is handy at times. The overall quality of the bike is good, not hi-end exotic quality, but good. I weighed the bike on my scales and it came in at 52 pounds. 29 pounds rear, and 23 on the front. The rear hub motor accounts for the extra weight at the back. My only comparison is eBee, the electric bike I created in 2012. It weighs 69 pounds, a mid-drive system with a 14 speed transmission. I enjoyed my time on the ENVO, and I think you might like it too. There is value here.

Original article by by EBikeBC

Or if like us, you’re already sold, simply order your new Envo D35 with Free Shipping and 100% satisfaction guarantee HERE 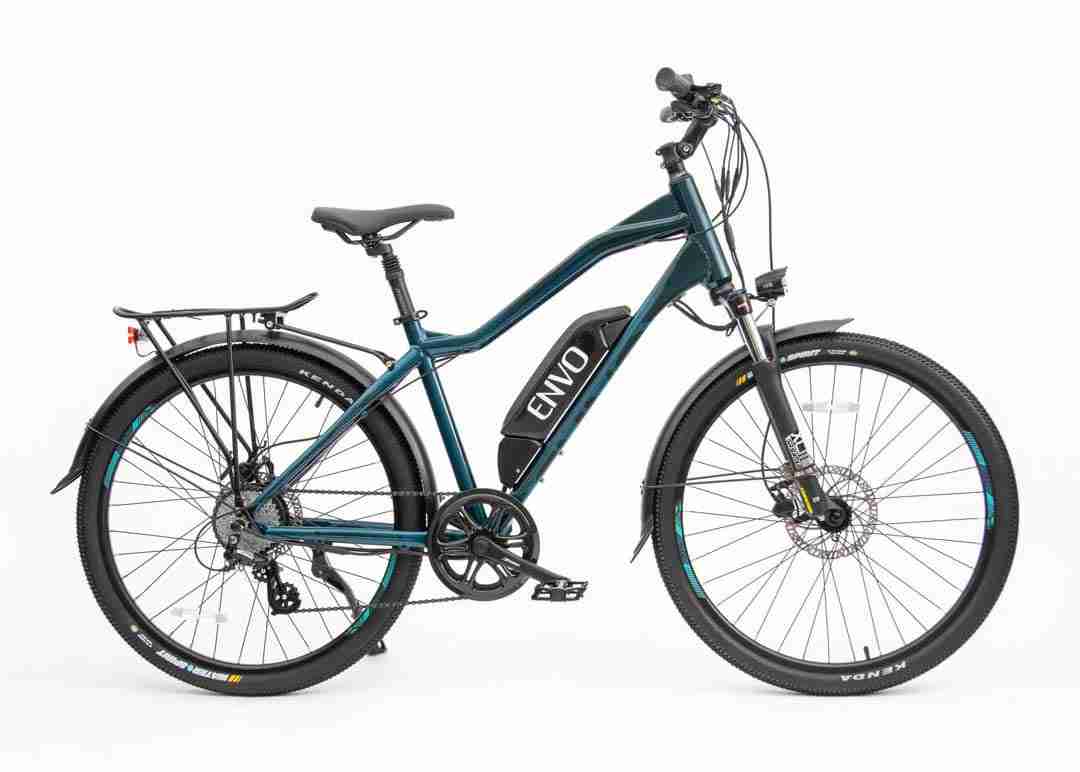 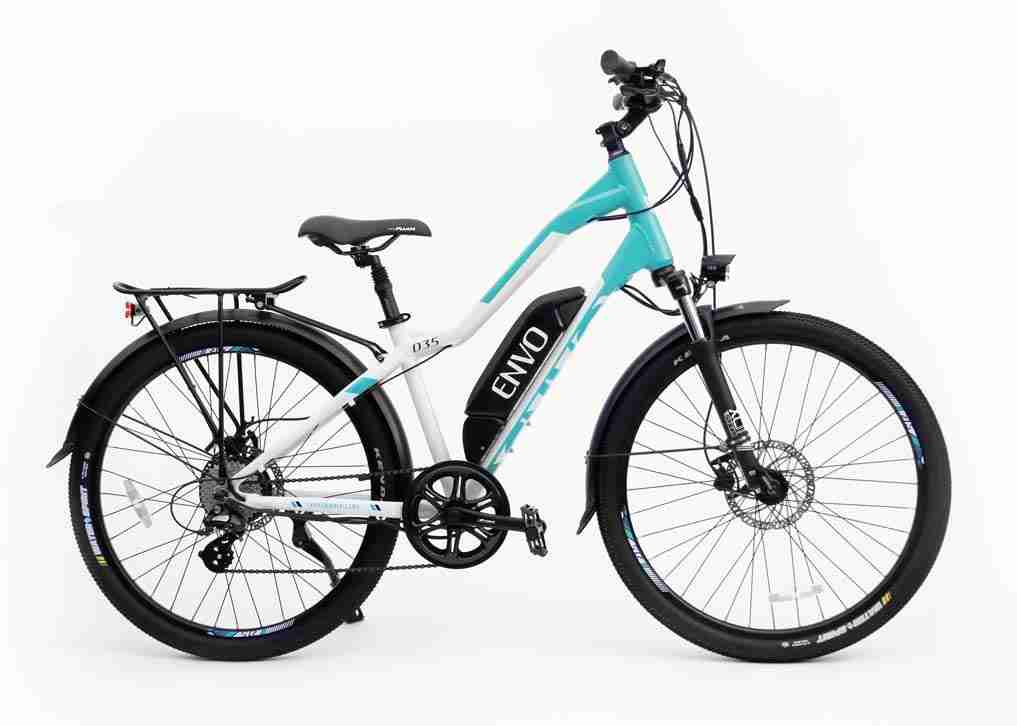 Our New Canadian E-Bike Showroom In The Press